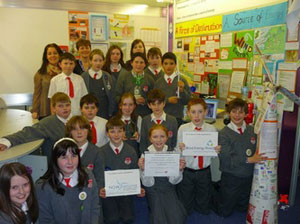 All of the 6th class of Dromclough NS attended the Young Scientist Exhibition in Dublin in January, where they took part in the Primary Science Fair. Their project was: “Wind as a Force of Destruction and a Source of Energy”, which drew much attention in Dublin from visitors to the Fair.

The pupils enjoyed their trip to the Science Exhibition very much, where they also had time to view other projects by primary and secondary school pupils from around the country. The completion of the project, under the direction of class teacher Mrs. K. Trench, was a big
undertaking but the pupils benefitted considerably from using their investigative skills, conducting various experiments and from the knowledge they accumulated. In the course of ompiling the material they visited Blennerville Windmill and the Pallas Wind Farm. With the assistance of parents they built operational miniature windmills and turbines. Some outside speakers also provided very interesting and up-to-date information.